In 2012 an International NGO Forum preceded a meeting of the UNESCO World Heritage Committee for the first time.

From 22-24 June 2012, representatives of Russian and international non-governmental organizations met international civil society activists in Saint Petersburg to discuss issues related to the protection of World Heritage properties. The main objective of the three-day event was to draw the attention of the world community to various problems of great concern. 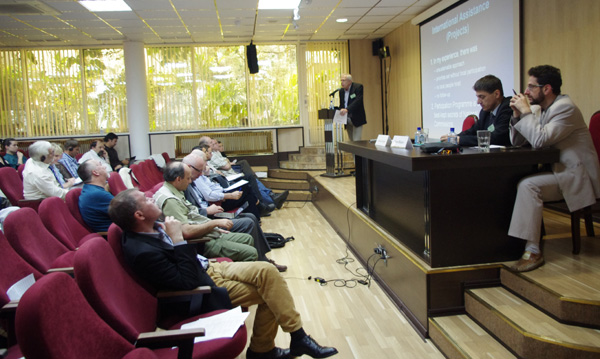 The first program was devoted to the natural heritage, the second one to the cultural heritage. Sharing experience of successful problem-solving in preserving the World Heritage, and building a system of effective interaction between NGOs and the UNESCO World Heritage Committee have been one of the main aims of the Forum on the Neva.

Upon suggestion by Stephan Doempke in his keynote speech, the NGO Forum adopted a resolution to create a global network of non-governmental actors who reside in or in the vicinity of, are concerned about, or focus their work on the protection of World Heritage Properties.

World Heritage Watch (WHW) was eventually founded as an NGO under German law in Berlin on 14 January 2014.

WHW then organized the next NGO Forum which was held in Bonn, Germany, on 26-27 June 2015, again immediately prior to the session of the World Heritage Committee. The participants of the Bonn Conference decided that World Heritage Watch as a formal NGO should remain as small Berlin-based body acting as a coordinating office for the informal global network of non-governmental actors.

The organizers of the forum were: